DETAILS
You are here: Home » Information Center » News » Industry Encyclopedia » How to Take Apart the Inside of a Shower Faucet

How to Take Apart the Inside of a Shower Faucet 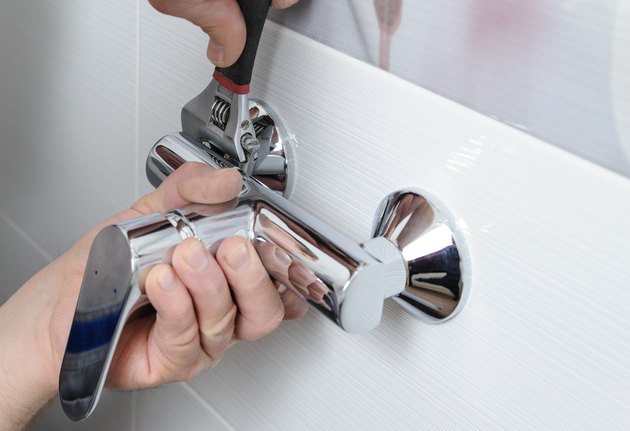 No matter which type of faucet valve you have, the process for disassembling it is essentially the same. The job can be more or less complicated, however, depending on the features the manufacturer built into it. Moen, the king of cartridge faucets, offers models with temperature limiters and pressure-regulating mechanisms.

A general disassembly procedure works for most faucets, but if you're in doubt about the details of your shower faucet, look up the manual on the manufacturer's website. It will alert you to any features that you need to take into account when taking the faucet apart.

If you have to pull out the handle of your shower faucet to turn on the water, the faucet has a cartridge. If the faucet leaks or you can't control the temperature, you usually have to remove the cartridge and clean it or replace O-rings and gaskets. The procedure begins with turning off the water to the shower and opening the faucet to release water pressure.

Pop off the cap covering the handle screw using a flat-head screwdriver. Underneath, you will find a Phillips screw, and after you loosen and remove it with a screwdriver, you should be able to pull off the handle. Lever-style handles are held on by an 1/8-inch hex screw located under the lever. Remove it with a hex wrench.

After removing the handle from a ball-valve faucet, the next thing to do is to unscrew the dome-shaped bonnet. You usually need to grip it with pliers to do this. To avoid damaging the finish, wrap a rag around it first. Once you've removed this, the ball-valve assembly simply lifts out along with the adjustment ring and an O-ring. Inside, you'll find rubber gaskets around the hot and cold inlets, and there are springs underneath them. Lift out the gaskets and springs with a screwdriver and replace them.

When a two-handle faucet leaks, you must extract the valve stem from the valve housing to fix it. First, remove the handle. If it's broken, a shower handle replacement may be in order. Next, unscrew the valve using a pair of locking pliers and pull it out of the valve housing.

Sometimes, the faucet is leaking because one of the valve seats is cracked. The valve seats are replaceable, and to remove one, you need a seat wrench, which looks a bit like a hex wrench. Insert the wrench into the valve housing and through the valve seat, and then turn the seat counterclockwise to unscrew it.