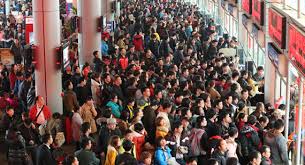 Spring Festival Transportation, or Spring Festival travel rush, is a phenomenon of   large-scale high traffic pressures that occurred in China before and after the Lunar   New Year. It is known as the largest and periodic human migration in human     history.

In 40 days or so, there are more than 3 billion population movements, accounting for 1/2 of the world's population, which is equivalent to two major migrations of the whole nation. China's Spring Festival Transport has been selected as the largest   cyclical transport peak in the world by the World Records Association, creating     many of theworld's greatest and China's greatest.

The " Spring Festival Transportation " in spoken language has two meanings, one refers to the transportation phenomenon before and after the Spring Festival, and the other is the abbreviation of "Spring Festival Period". Since “Reform and Opening”, with the relaxation of restrictions on the mobility of people, more and more people choose to go out to work and study. Many people concentrated on returning to their hometown during the Spring Festival, forming a spring festival called “the world's rare population movement”. Seeing the above data, are you panicking about whether you can go home this year?  Don't be afraid. Here are some ticket-buying strategies to make sure you can go homefor a good New Year.

1. Master the time of ticket issuance

2. Get up early and grab tickets

If you don't get tickets at the first time, don't worry, refreshing the page will help to improve the efficiency of ticket grabbing.

You can buy it from the first or two stations in the departure city and get on at this station to avoid the hot stations.

a. 45 minutes after the start of the train ticket sale, some passengers who grabbed the ticket did not pay in time, at this time the

ticket source will return to the ticket warehouse;

b. 15 days before driving is the peak period of refund;

c. driving before the first 48 hours;